This week I took a look at the program ‘Scratch’. As the Vimeo video showed, the Scratch program is similar in nature to the programming style used to create a number of online video games (check out this site for some examples, or just to procrastinate on school work).

I have to admit, using this program was for me, at first, a huge pain in the neck. I had messed around with the Blockly Demo: Maze program first, and found the layout and and interface very easy to follow. Below is my instructions (code) for rescuing the little Stick Man from the maze: 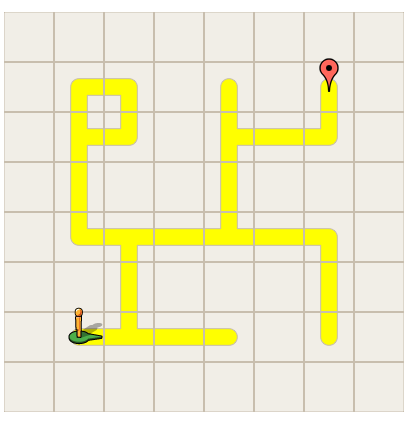 Granted, my code was very simplistic and the maze not very difficult to figure out logically, so that may have something to do with the ease of using this program. However, for a program newbie like me, this was a great way to get introduced to it all.

In contrast, the Scratch program was a bit of a nightmare at first. What was most overwhelming for me was the vast number of commands to choose from:

In this box are eight different sections for controlling the characters in the program (which, in themselves, were also very complex – you could choose to load pre-existing characters or even create new ones! I chose to experiment using my roommates face, she loved it). Clicking on the various programs brought up various options, these:

I have to say, many of these were fun to play with, but exhausting to try to get to work in the sequence. One that I tried listed under ‘Sensing’, was an option to ‘ask <insert question> and wait’. I proceeded to insert that into my string of commands, followed by a number of others. However, when I tried to play it, the sequence would always get stuck just after this command. After going through it a few times, the genius moment finally dawned on me; I had set it to wait, but never gave it a set amount of time. I tried to pair it with other commands that had a set time limit, but never was able to get it to work (the theme of my many attempts). Eventually, I was able to mess around with the background and include a few of the simpler movement and sound commands (the ‘meow’ was a favorite in my apartment). Overall, the Scratch program for me had much more content and potential to explore and grow in programming skills (potentially even creating stories and scenarios, as the video mentioned in the beginning alluded to).