“Neither camera, nor lens, nor film determine the quality of pictures; it is the visual perception of the man behind the mechanism which brings them to life. Art contains the allied ideas of making and begetting, of being master of one’s craft and able to create. Without these properties no art exists and no photographic art can come into being.” — Helmut Gernsheim, 1942

In the readings for this week, Errol Morris discusses his investigatory journey into the famous set of photos of the Crimean War, entitled “The Valley of the Shadow of Death”. Initially in his argument, Morris states that the ON photo (the photo in which the cannons are placed on the road) came first, and that the OFF photo (the photo in which the cannons are on the sides of the road) came second, counter to the argument posed by Susan Sontag. In his quest to discover whose analysis is the correct one, Morris enlists the help of various scholars, as well as relying on technological advances since the 19th century date of the photos. Below are a few image results from Morris’s final scholarly tool, in which he enlists the help of technology to scan the photographs, focusing specifically on the movements of the rocks in each: 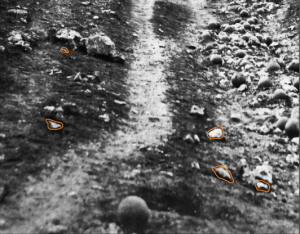 The rocks analyzed from the OFF photo 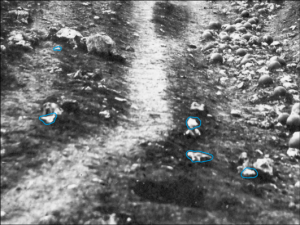 The rocks analyzed from the ON photo 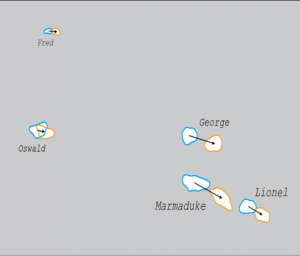 A visual analysis on the OFF and ON rocks

In a debate that has been ongoing, from my understanding, for a majority of the 20th century among historians of the Crimean War, Morris is able to definitively say which image came first by studying the rocks in the image, rather than the character of the photographer. Not only does this show a shift in the analytical response to this debate (turning to technology rather than mere speculation), but it also shows a shift in reasoning behind answering the debate at all. As Morris points out throughout his three part response, Susan Sontag and other historians had cited Roger Fenton’s motivation for moving the cannonballs into the picture as cowardly and motivated by the intention to deceive. While Morris in the end proves Sontag and others correct in their ordering of the photographs, he disproves them on a point that I feel is more central to their argument. They ordered the pictures based on a false perception of Fenton, namely that he was trying to get a rise out of his audience. In the end, Morris uses something that no one cared about or thought to investigate (the placement of the rocks) to determine the true order of the photographs.

While generally speaking I didn’t have too much of an investment mentally in this argument as compared to a historian on the Crimean War, I did think it was interesting that it was technology in the end that allowed the true order of the photos to be determined. We have talked a lot in this course so far about the pros and cons of the web and moving historical things onto the internet. For me, this is one of the reasons why I think, overall, digitizing data is beneficial to the world of academia. Had these photos been lost, or only kept to a specific part of the population, its a great possibility that no certain answer would have been found. In addition, the use of the software program to analyze the rocks is another technological advancement that aided heavily in determining the order of the photographs, an advancement that would not have otherwise been possible if not for the use of digitized data.